Snacks & Drinks for sale (cash only)

The Kangaroo Valley community are invited to a special screening of the new documentary THE FINAL QUARTER, on Sunday afternoon 23rd June at 2:30pm at The ARTSLAB, Upper River Hall. The film will be followed by a Q&A with Director Ian Darling, Editor Sally Fryer and Producer Mary Macrae.

THE FINAL QUARTER is powerful and compelling and you don’t need to like or even know about Australian Rules football to be moved by this story. It is far bigger than football. Yes, Adam Goodes was a footy champion but he was also an Indigenous leader, and in the final three years of his playing career he became a lightning rod for a heated public debate and widespread media commentary that divided the nation.  He publicly called out racism, was named Australian of the Year, was accused of staging for free kicks, and performed an unforgettable on-field war dance celebration. The cheers became boos as football crowds turned on him.

THE FINAL QUARTER was directed by Ian Darling – Upper Kangaroo River resident, Sydney Swans supporter and patron of The ARTSLAB — who started this project after being deeply affected by the treatment of Goodes in his last years of football: “I was disturbed by it. It seemed unfair and bullying. But I was also confused. I didn’t fully understand what had provoked the crowd’s behaviour and why a person who had been considered the best and fairest AFL player in the land, was now the subject of constant vitriol”.

Using only archival footage aired at the time, the film holds a mirror to Australia and is an opportunity to reconsider what happened on and off the football field. Darling said he “felt the film could be a window into aspects of Australian life we often don’t want to talk about. I didn’t want the film to lecture or accuse. I wanted the audience to see and hear for themselves what had happened, to ask their own questions and to come to their own conclusions”.

“As a nation, we haven’t finished the conversation about racism that Adam Goodes asked us to have. The aim of this film is the same as that expressed in Adam Goodes’ Australian of the Year acceptance speech, when he said, “The real reward is when everyone is talking to their mates, to their families and to their children, having those conversations and educating others about racism. What it looks like, how hurtful and how pointless it is, and how we can eliminate it.””
THE FINAL QUARTER is premiering at the Sydney Film Festival in early June before other festival screenings around the country, and has already received much media and public interest.

We are thrilled that The ARTSLAB is able to bring this film to Kangaroo Valley in between! This special screening is free for the community and our supporters but we ask that you RSVP by emailing events@artslab.com.au to ensure a seat. We will also be collecting donations on the day, in lieu of ticket sales, with all profits going to the Upper River Hall, and we would appreciate your support if you can. The film has not yet been rated but the producers are expecting it to be PG. Our snack bar will be open selling popcorn, snacks, drinks, tea & coffee (cash only) from 2:30pm.

The film will commence at 3pm. I hope you can join us! 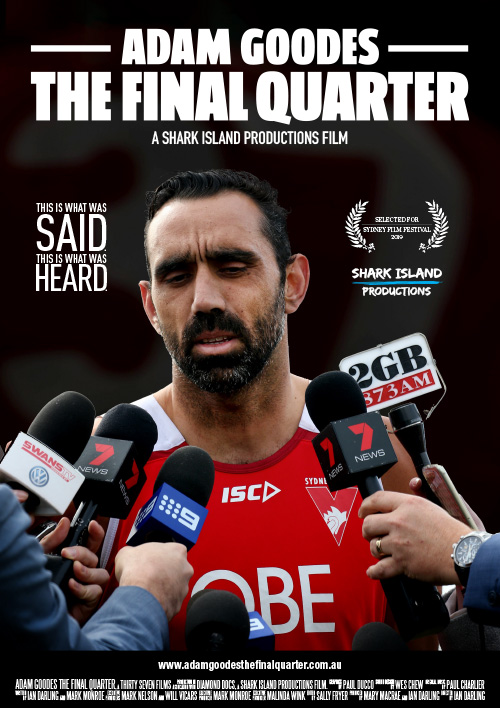